Based on application the Europe early toxicity testing market is segmented into drug discovery, chemical testing and others. According to end users, pharmaceutical segment is expected to be the fastest growing segment throughout the forecast period. It also accounted for the highest share in 2017, and is anticipated to maintain this trend over the forecast period, owing to rise in number of clinical trials for drug development. During drug development, early toxicity testing can help reduce the risk of later stage failure for drug development, which predominantly fuel the growth of the pharmaceutical industry market.

In 2017, Germany accounted approximately one fifth share of the total Europe early toxicity testing market and is expected to continue this trend owing to higher number of R&D activities, high presence of research lab, companies and institutes, and wide availability of technologically advanced preclinical diagnostic instruments. On the other side the UK is estimated to register the fastest growth during the forecast period.

According to a new report published by Allied Market Research, titled,“Europe Early Toxicity Testing Market by Technique, Application and End User: Opportunity Analysis and Industry Forecast, 2018 – 2025,”the Europe early toxicity testing market is expected to reach $460 million by 2025, registering a CAGR of 7.1% from 2018 to 2025, in terms of value.

Early toxicity testing is the analysis of a new drug compound in the drug development process. The testing is conducted to determine the damage caused to the body by the compound. Toxicity testing of drugs is vital as it helps in avoiding severe adverse drug reactions in the body. The testing is carried out in different mediums such as in vivo, in vitro, and in silico. These tests are carried out before pre-clinical trials to analyze the drug candidates, which are further tested in clinical studies carried out in humans. Moreover, early toxicology testing is necessary as it can prevent financial losses that occur during the failure of drugs in further late stages of drug development. 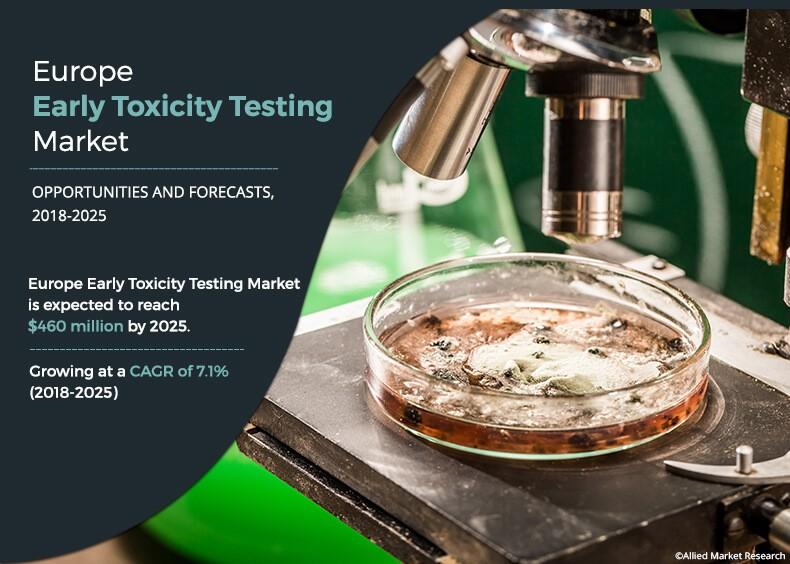 Factors that drive the growth of the Europe early toxicity testing market include rise in R&D activities and surge in stringent regulatory authorities concerning public healthcare welfare. In addition, increase in adoption of in vitro model due to strict guidelines in favor of animal protection also serves as factors for the growth of market. However, challenges of preclinical testing hamper the market growth. Furthermore, technological advancements in preclinical procedures provide lucrative opportunities for the market growth.

Do Purchase Enquiry at: https://www.alliedmarketresearch.com/purchase-enquiry/5254

On the basis of technique, in vitro segment is major revenue contributor in 2017 and is expected to maintain its dominant position throughout the analysis period due to rise in adoption of this technique across different diagnostic areas. Europe is extensively active toward protection of animals. Europe government has banned testing of cosmetic and household products on animals. Therefore, in vitro testing serves as a feasible alternative to in vivo testing, which serves as another major reason for the growth of the in vitro market. Moreover, lower costs associated with carrying out this technique also boost the growth of this market. In silico segment is the fastest growing segment during the forecast period, owing to rise in its adoption due to advantages offered by the technique. In silico techniques have revolutionized the drug discovery process as these techniques are not only applied to find new targets and new molecule with high affinity to those targets but also used to determine the metabolic pathways of those active molecules. In addition, these techniques are computer-based that eliminate animal sacrifice, which is another factor that fuels the growth of this market.

Drop us an email at
[email protected]

Allied Market Research provides one-stop solution right from data collection to investment advice. The analysts at Allied Market Research dig out factors that help clients understand the significance and impact of market dynamics. The company applies client’s insight on the factors such as strategies, future estimations, growth or fall forecasting, opportunity analysis, and consumer surveys among others. As follows, the company offers consistent business intelligence support to help clients transform into a prominent business firm.

How to Boost the Efficiency of Your Business